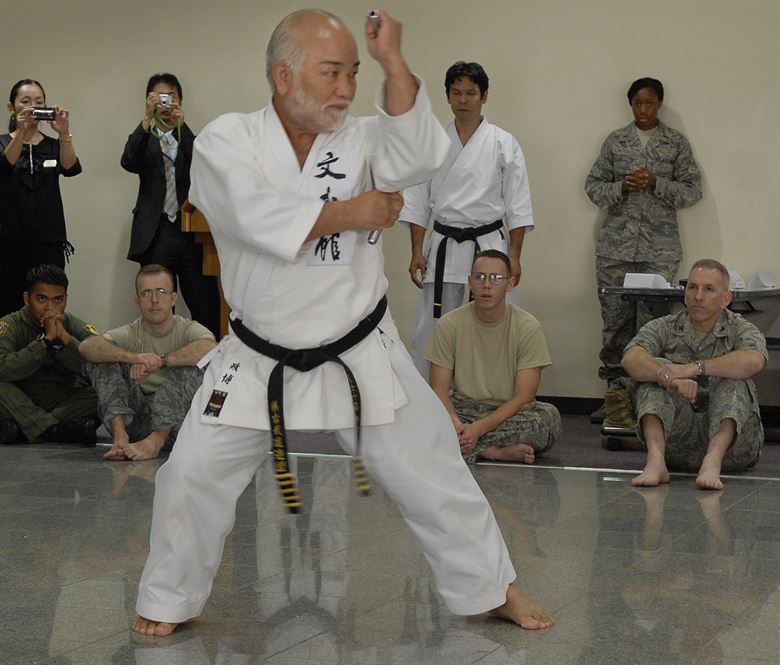 According the Mark Bishop in his book OKINAWAN KARATE: Teachers, styles and secret techniques, karate or “Chinese hand” was introduced, in the late 19th or early 20th century, to Okinawa by a visitor from China named Kusanku (also known as  Ku Shanku or Koso Kun), who gave a demonstration to the local Okinawan population. Mr. Bishop writes that the introduction of karate or tode was brought about by either Okinawans who studied in China or Chinese who came to Okinawa. Patrick McCarthy in BUBISHI: The Classic Manual of Combat, mentions that a Chinese mission or delegation settled in Okinawa in the year 1393. The members of the Chinese mission were known as the “thirty six families.” They settled In Kume village. Kume village, described as a “window to Chinese culture” was where Okinawans could learn literary and spoken Chinese. In addition they could learn other skills such as shipbuilding. Mr. McCarthy writes that it is most likely that these Okinawans learned martial arts as well in their travels to China, specifically Fujian(Fukien) province.

The Okinawans who received a Chinese education were most likely from the upper class of Okinawan society. Contrary to the mythology of karate being developed by the Okinawan peasants to fight against the Japanese samurai from the province of Satsuma, both Mr. Bishop and Mr. McCarthy write that karate was developed by the Okinawans of the Shizoku class, who were comparable to the Japanese samurai class, not the peasant class. The founder of modern day Shotokan Karate, Gichin Funakoshi (1868-1957) specifically stated in his memoir, KARATE DO: My Way of Life, that he was from the Shizoku class.

Japan adopted the pictograph or ideogram form of writing from the China. The Japanese called these pictographs “kanji” while the Chinese called the pictographs “hanzi.” While the Okinawans did have their own indigenous martial art, they were also influenced by Chinese martial artists. The original ideogram “Karate” could be read as either “kara” or to (or tou pronounced like the English word “toe”). The word “To” or “Tou” was the Japanese word for Tang. Not only has the word “kara” been used in the context of martial arts, that same word has also been used in weather. When this writer complained about the cold weather to a pastor at a local Japanese Christian Church, he responded that the there is a cold wind from China which the Japanese called “kara kaze.” This pastor explained that the kanji for Kara (China) could also be read as “Tou Jidai.” Someone else explained to this writer that “Tou” was the Japanese word for saying “Tang.” Another thing to keep in mind is Grimm ’s Law which states that sounds can change or mutate. For example a “t” sound can be changed to a “d” sound. So instead of te, the Japanese or Okinawans may say “de” for the word “hand.” So if you drop  jidai, from “To Jidai,” change “te” to “de,” Then combine the words to and de. You get “tode.” Mark Bishop writes that tode began to be called karate in the first half of the 20th century, meaning that the word karate is of relatively recent origin.

This writer would like to share what he learned about the kanji for “karate” in discussions with various people on the ideogram (Japanese kanji or Chinese hanzi) about the word “karate.” While the kanji or hanzi have the same meanings, the Chinese and Japanese pronounce the ideograms differently. The Mandarin pronunciation of karate jutsu is Tang Sho Shu. The Cantonese pronunciation is along the lines of Tang Sau Sut. Both dialects of Chinese explicitly reference the Tang Dynasty. The Tang Dynasty is apparently another way of referring to China or Chinese. One Cantonese speaker mentioned that Tang Yen, was their way of referring to the Chinese people. A Mandarin speaker pointed out that Tang Ren Jie, was their way of referring to Chinatown. The Tang Dynasty must have been a “golden age” of Chinese history. Perhaps that is why the Chinese make reference to that era. According the previously mentioned Japanese pastor, To Jidai (To era or Tang Dynasty) was an era of prosperity for Japan. This was an era of trade between the two countries. (For those interested there the kanji for both karate jutsu and karate do are written side by side on page 234 of Patrick McCarthy’s book Bubishi).

To add to the confusion, the Okinawans had their own indigenous art they called “ti” (pronounced “tea” as in the beverage). The word ti has also been transcribed as “di.” (See McCarthy’s book and think of Grimm’s law again about the t sound changing to the d sound). The  Japanese called  that same martial art “te” (pronounced “tay” as in the name “Taylor). Both ti and te mean hand. Since Fujian (Fukien) province in China had a lot of trade with Okinawa, along with Okinawans traveling to China to learn trade skills, languages or martial arts, perhaps it was inevitable that the indigenous Okinawan martial art of “ti” would be influenced by the Chinese martial arts. Maybe the Chinese influence on Okinawan martial arts may be why the Okinawans starting using the word “karate.” The indigenous martial art “ti” still existed at the time Mark Bishop’s book was published. In his research, Mr. Bishop, discovered that while karate masters knew almost all there was to know about their own style, they did not necessarily know about other karate styles or that the indigenous martial art of “ti” still existed. Some of these karate masters assumed that the indigenous martial art of ti was absorbed into the karate ( a hybrid of indigenous ti combined with Chinese martial arts). The martial art tode, later called karate, had also been called to-te or even tuti. (see Bishop’s book). So the alternative readings for karate can be a bit confusing: tode to-te, toudi, tuti etc.

The person who deserves credit or blame for changing the “spelling” of karate from “Chinese” hand to “Empty” hand belongs to Gichin Funakoshi. While the sound of the word “karate” remained the same, the change in kanji or pictograph, resulted in a change in meaning.  Mr. Funakoshi justified the change in his book KARATE DO: My Way of Life, on the grounds that he wanted to distinguish his Okinawan art from the Chinese martial arts.

Others like Bishop and McCarthy point to the anti-Chinese sentiment, which existed in Japan at the time (1922). Mr. Bishop, wrote that the Okinawans had the foresight to see that their martial art could play a role in Japan’s military. But obviously they could not present their martial art as one with Chinese roots to the Japanese military.

So they repackaged their art, downplaying the Chinese influence. In short they tried to “Japanize” the art to Japanese tastes. “Chinese” hand to go and be replaced by “empty” hand. The original kanji used by the Okinawans can be read as Karate jutsu or “Tang hand science.” . The change in kanji or spelling resulted in the meaning “empty hand way.” The change from jutsu (“science”) to do (way) had philosophical connotations. Patrick McCarthy pointed out that the word “kara” as in empty could also be read as “ku” which means “void.” The concept of “void” is a term used in Mahayana Buddhism. The idea Is one of detachment from desire. Also the use of the word “do” or “way” was to bring karate in line with other arts such as Judo or kendo.

Other moves to make karate more acceptable to the Japanese included the karate uniform. Okinawan practitioners felt the kimono was too restrictive and would train in their underwear or loincloth. This practice was unacceptable to the Japanese martial arts bureaucrats who were influenced by the military at the time. So karate practitioners started using judo uniforms. Enterprising merchants who saw an opportunity, started selling lighter weight uniforms, based on the judo uniform. The merchants called the new uniform the karate gi (karate uniform). The uniform which originated on the Japanese mainland, found its way back to Okinawa.

The promotion of Okinawan karate to Japan and then the rest of the world, involved “repackaging” the art to make it more acceptable to the Japanese, be it in terminology or adoption of uniform. Perhaps the folklore of mythology of Japanese peasants developing a deadly fighting art was added to appeal to the Western audience. The profit motive also entered into the equation. Karate master Shintaro Yoshizato, who was profiled in Mark Bishop’s book believes the profit motive was most likely led to the division of karate into “styles.” Yoshizato sensei (teacher) pointed out that the forms or kata  are essentially the same saying that a man has two hand and two feet, with a finite number of moves.

BUBISHI: The Classic Manual of Combat by Patrick McCarthy Tuttle Publishing 2008. This is a translation, by Patrick McCarthy, of a work by an unknown author. The Bubishi was considered the “Bible” of Okinawan karate. It was written in Chinese. In addition to translation and commentary of the original text, Mr. McCarthy provides the reader with information on Okinawan karate history.

Karate Do: My Way of Life by Gichin Funakoshi. Kodansha International Ltd. 1975. This book was  before the author’s death in 1957.